Kelp, COVID-19 and other Stressors to Human Health 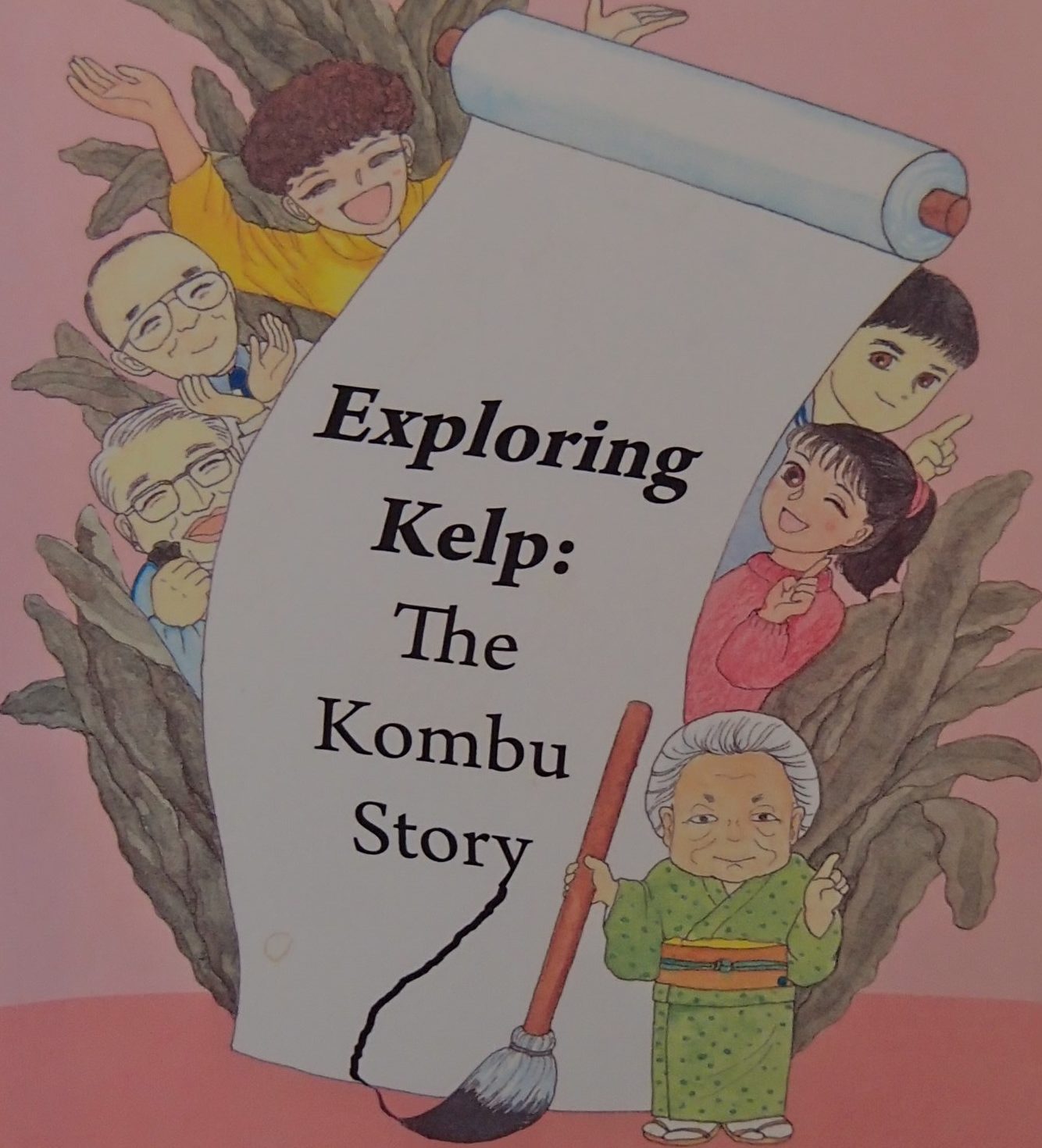 CKR considers kelp a health food, much like kale, but more. Kelp’s arsenal of essential micronutrients, dietary fibre, algal gels, exotic chemicals such as pigments, fucosterols and others is unique. This chemical array strengthens us in resisting and fighting infectious diseases, and various ills, through balanced nutrition. Please find an elaboration of this statement below.

As a thank you to our customers, we are offering a free copy of The Kombu Story with every purchase of 3 kelp packages or more for orders submitted in April and May 2020.  The Kombu Story focuses on the benefits of kelp to human health, shares kelp facts and tasty recipes.

“Science has over the years shown that seaweeds contain a bounty of compounds that are known to be good for our general health and nutritional status, such as macro- and micronutrients, minerals, vitamins, antioxidants, omega-3 fatty acids, and dietary fibers.”

FOLK TRADITIONS AND THE HEALTH MOVEMENT

For many millennia, the original inhabitants of all continents, especially those in coastal areas, have availed themselves of seaweeds for food and medicine. In the last few decades, numerous health movements have embraced seaweeds and marine algae and touted their beneficial aspects. Some of these claims are well founded, at least from a scientific point of view. In other cases, probably the majority, the supposed positive effects are supported by references to tradition and experience. There is a real need for research in this field.

Throughout the ages, and increasingly in connection with a variety of modern health movements, beneficial properties and the ability to cure all sorts of ailments, from digestive problems to cancer, have been ascribed to seaweeds, algae, and products made from them.

WHAT HAVE WE ALREADY LEARNED?

In general terms, it can be said that a varied diet that includes a proportion of seaweed products, for example, up to10% as in Japan, promotes wellness. This is due principally to the high concentration in marine algae of important minerals and vitamins. These minerals in seaweeds are in what are known as chelated and colloidal forms, which enhance their bioavailability in the body. Seaweeds are also a good source of proteins and essential amino acids.

In addition, marine algae have a much greater fiber content than vegetables and fruits, as they are largely composed of both soluble and insoluble dietary fiber. Because dietary fiber is indigestible, it contributes no calories, but instead enhances digestive function by absorbing water and thereby easing the passage of food through the intestines. Soluble fiber, in particular, slows the rate at which carbohydrates are absorbed, which helps to lower blood sugar levels, a potential advantage for diabetics.

Also, the alginates found in the cell walls of brown algae appear to have the beneficial property of being able to bind heavy metals and radioactive isotopes such as strontium-90 and iodine-131. It has been shown that sodium alginate reduces the uptake of strontium in the intestines by a factor of seven. One drawback, however, is that the fiber can also retain important micro-nutrients, preventing them from being absorbed in the digestive tract.

Seaweeds, especially the brown algae, contain chlorophyll, carotenoids, vitamins, sterols, and phenols, which have well-documented antioxidant properties that can help to ward off cardiovascular disease and some types of cancer. Studies currently under way indicate that seaweeds also protect against viral diseases and bolster the immune system.

The relatively high level of unsaturated and essential fatty acids, especially the omega-3 fatty acid EPA, is a good reason for eating seaweeds. It is widely accepted that omega-3 fatty acids counteract cardiovascular disease and reduce the risks of severe after-effects resulting from blood clots and, in addition, inhibit the build-up of cholesterol in the arteries.

Omega-3’s also play an important role in the development of the brain and the nervous system, particularly in utero and in the first year of life and, presumably, in keeping them in good working order well into old age. Some studies indicate that a good intake of omega-3s fatty acids, with an appropriate balance between omega-6 and omega-3 fatty acids, can reduce the risk of psychological illnesses such as bipolar disorder, schizophrenia, and certain neurodegenerative diseases.

The above needs to be looked at in the light of two circumstances. First of all, the diet in Western countries is out of balance with respect to its proportion of omega-6 to omega-3 fatty acids, as the consumption of omega-6 fatty acids is far too high. Secondly, a drastic growth in the incidence of mental illness is coming our way in the slipstream of the widespread lifestyle diseases that have already plagued the 20th Century, that is to say, cardiovascular disease, hypertension, obesity, type 2 diabetes, and cancer. Much research indicates that this can be attributed to dietary factors, which include too little fibre, to few omega-3 fatty acids, and too many calories, including those from refined carbohydrates.

Utilizing seaweeds to impart a salty taste to foods has the nutritional advantage that its disproportionately high potassium content does not interact with the sodium in the bloodstream and, therefore, does not elevate blood pressure as does ordinary table salt.

One of the most important contributions of seaweeds to wellness might turn out to be the combination of effects brought about by dietary fiber and seaweed sterols, in particular fucosterol. Apart from the beneficial way in which soluble and insoluble fiber work in the digestive system and increase the feeling of satiety, they seemingly also positively affect the circulatory system. Fucosterol brings about a decrease in the cholesterol level in the blood.

The mechanisms responsible for all this are not known in detail, but research has shown that it is possible that several different ones are involved. In the first place, fucosterol depresses the biosynthesis of cholesterol. Secondly, it seems that fucosterol elevates the amount of so-called good cholesterol (HDL or high-density lipoprotein) and reduces the amount of bad cholesterol (LDL or low-density lipoprotein). Thirdly, dietary fiber content comes into play. For example, the cholesterol level in the liver is reduced when alginates moving through the intestines bind with bile salts and, with them, a quantity of cholesterol, all of which are then excreted from the body.

Furthermore, it turns out that several of the polysaccharides in seaweeds also lower the level of LDL, free cholesterol, and triglycerides in the bloodstream. The combined effects of dietary fiber and seaweed sterols on the entire complex of problems associated with cholesterol and its transport within the body are, therefore, positive and can help to lower the risk of cardiovascular disease.

It has also been shown that fucosterol has another important function in that it inhibits the formation of blood clots by acting as an anticoagulant. The mechanism is that fucosterol enhances the action of a factor (plasminogen-activating factor) that, through a series of biochemical steps, results in increased formation of plasmin, an enzyme that helps to dissolve blood clots. It is possible that it acts in synergy with the effects produced by the seaweed polysaccharides, especially fucoidan, most commonly found in the brown algae konbu and wakame. Fucoidan stimulates the formation of heparin, a naturally occurring anticoagulant, which allows the body’s own mechanisms to break down clots.

Throughout the 1980’s and 1990’s, the hunt was on to find specific biologically active substances in seaweeds. It has been estimated that in the decade between 1977 and 1987, 35% of all newly discovered natural substances came from seaweeds and algae. While these efforts continue, they are now directed more intensely toward marine microorganisms. Nevertheless, further research is likely to identify bioactive substances in seaweeds that have special health-promoting or medicinal properties. It is, however, not obvious that these properties should be attributed to only one or a few substances, but rather to the particular combination in which they occur in seaweeds, which quite possibly allows them to form a synergistic relationship.

In summary, it would appear that, generally speaking, seaweeds as an entity with all of their constituent substances have a predominantly positive impact on human health. Without doubt, seaweeds are among the most obvious candidates for the role of nutraceuticals, that is, foodstuffs with potential for use as pharmaceuticals.

Professor Ole G. Mouritsen, University of Southern Denmark, researches biophysical aspects of biotechnology, biomedicine, and food science.  He is an elected fellow of the Royal Danish Academy of Science and Letters, the Danish Academy Technical Sciences, and the Danish Gastronomical Academy, and he has received several prestigious prizes, including the Danish National Prize for Research Communication and the British Royal Society of Chemistry Bourke Award. His books, of particular interest to those into seaweed foods, are Sushi, food for the eye, the body and the soul. Springer, 2009, Seaweeds, edible, and sustainable, University of Chicago Press, 2013, and Umami, unlocking the secretes of the fifth taste, with Klavs Styrbaek, Columbia University Press, 2014. These books, in addition to being very informative, are entertaining and richly illustrated.